Time for giggle blog, and this month the giggle is on me. You may remember, that I had a major surprise on the go for someone special who was having a big birthday, that isn’t for a few weeks yet? Well, it’s tricky keeping secrets when normally you tell each other everything, and I’m told, I whisper louder than I talk.

So, the surprise was underway, all the family agreed, it was a good idea, all going to share in the present, and that person in question would absolutely love it. Well, yesterday, I went on a mission, zipping along the motorway, in the red dragon, (son’s car). Hubby was out at work in our car, and I didn’t want to arouse suspicion. So off I went, not zipping, more tootling around the lanes of Leicestershire, noticing how the hedgerows were beginning to look lush, and how green and yellow finches were nestling on the hedgerows. I told our son, ‘don’t worry, I won’t drive fast in your car.’ He replied, ‘that’s the trouble, you drive too slow!’ I got lost along the way, but eventually found my destination.

I was in springer spaniel heaven. Black and white dogs to the right in a pen, lots of them. As the lady greeted me, she shouted, that brown and white one is puppy’s mum. She was gorgeous, with that look, ‘what have you brought me, anything, surely, something?’ Then going through the gate, was the one that was booked for the surprise present. He was too cute for words. He was cuddly, and decided my jumper was tasty, and my necklaces were quite good to chew on as well. She asked what we were going to call him. We’d all agreed that as he was to be hubby’s pressie, he could name him. I’d call him Bramble, or Sweep. His dad’s name is Bentley, and his mum is called malteser. ‘He’s ready to go at the weekend,’ she told me. Now it’s a bit early, but he’s the one we/I wanted.

So, being that the puppy needed to be named by the weekend, for his papers, I decided now was a good time to reveal the big birthday surprise, I couldn’t keep quiet any longer. Now, I don’t think I’ve ever seen such an adverse reaction to a surprise pressie.

‘We can’t afford a dog!’ was the first statement, and then ‘I’m getting more hours at work now.’ True, the part time job has gone to double hours as people are off sick. ‘You’re looking for a job,’ next statement. Then complete silence for a while. ‘How would it be fair to bring a dog home and not be here to look after him?’ There comes a point when you begin to realise that all these are true…. ‘We’re in the middle of doing the house up. Had you forgotten?’ No, that had crossed my mind somewhere along the line. It was beginning to come to my attention, that my big surprise was definitely that, but in a bad way. And, if I’m honest, as I was cuddling Bramble (I’ll call him now, because he’s my dog for the day) I was a bit worried about what would happen if the temping agency sent me out for a full time job. So, there goes the big birthday surprise. I have something else up my sleeve, maybe on reflection, it’s best kept there. 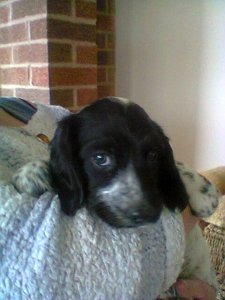 Puppy for a day….

On a serious note, even though it’s a giggle blog, goes to show you should never buy a dog for anyone. It’s something you have to do for yourself, and only if you can be home all the time with him. And, I’ve got my puppy for the day pictures to keep. Just like my black and white hubby, he has no grey areas, (except on his head) he says, at least you know where you are with him. And, if I’m honest, the fun was in the finding the cutest puppy, a day out in the red dragon, and cuddles for a while. Blimey, I’m turning into one of those crazy old ladies, who drives around the countryside picking out puppy’s and then ringing up the next day to say, ‘ssssooooorryyy,,,, but you seeee…..’ honestly, I put it down to menopausal madness… The lady had had someone the week before me, ring to say she’d call, and she didn’t. Oh, well, at least I called for a cuddle. I’ll now enjoy springer stories on Teresa’s blog.

Now we have more gigglers. If you want to be one, all you have to do is post what’s made you giggle lately, at the start of each month.

Until next time….. a puppy is for life, and never buy one as a present.