From the oxford dictionary

The universe seen as a well-ordered whole. ‘he sat staring deep into the void, reminding himself of man’s place in the cosmos’

A system of thought.
‘the new gender-free intellectual cosmos’
An ornamental plant of the daisy family, which bears single dahlia-like flowers and is native to Mexico and warm regions of America. (And some gardens in the Midlands)

A few months ago, I was given a book to read and inbetween the pages was a pack of free seeds from a gardening magazine. Now seeing as it would have been rude not to plant them, I had a vast amount of cosmos plants within a week or two. They grow quite quickly and end up taller than I could have imagined. They remind Alan of stars and when they sway in the wind, I can see what he means. Wonder if that’s how they were named? From now on, I’ll be planting a tray of cosmos every year.

It’s that time of the year when I had a trip to the hairdressers, so here’s my snazzy new look with a shorter, more snappy style. Don’t expect it’ll stay like it for long, so you have to get a photo don’t you? Enjoy the crispy days of autumn, and make the most of this lovely spell we’re having.

Alan having a break from car cleaning

Popped in to the library while I was waiting for my appointment at the hairdressers, and look what I found on the shelves. Not only that, when I looked at it, they’ve given it a strong covering of thick plastic, and from what I can see it’s been well read. I’m sure several people have taken a trip to the Norfolk village. 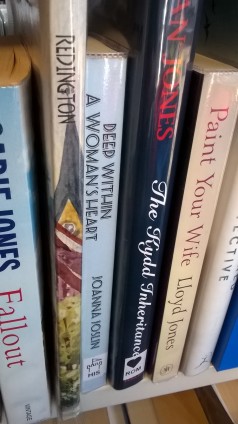 Have a great weekend, and if you can, pop into your local library. They need our support otherwise they might be gone one day and that would be tragic.