My latest story to be published on Alfie dog short story website is called ‘Sowing Seeds.’ Its about Walter, and how he tries to avoid the woman next door. She means well, but won’t leave him in peace to get on with his gardening. The story has been published before, but now it’s added to my growing collection on there.

A couple of photo’s to go with the story…

If you’ve got children at home who’re a bit bored by now, tell them to settle down and listen to the story of Alex. He has a metal detector, and a dog. Together they get up to lots of fun during their stay in a cottage near Exmoor.

The summer holiday story is suitable for 7 – 8 year olds, hope you and they enjoy reading it – it’s fiction, and part comedy part fairy tale, told in the voice of Alex. So what are you waiting for? Get yourself off to Exmoor and join in the fun. 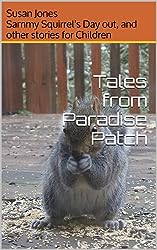 Here’s one for younger children. A collection of stories set in Grandma’s back garden. There are five stories in all, and they’re suitable for 4 – 7 year olds. It’s not as quiet as you might think on Grandma’s back yard.

Growing up in the 70’s is a collection of 4 stories, and mine’s one of them that won a competition to be published with black coffey. They wanted funny stories set in the 70’s. The reviews aren’t brilliant on there, but I think the reviewers were a bit harsh. And isn’t that cover funky?

Now I’ve got a brand spanking new cover for my Redington collection, which will be published soon. I’ll wait until the whole thing is finished before revealing the smashing art work.

4 thoughts on “Stories for summer”